Numbers of Farehd Members' Support in each Region:

The Haitian economy has been recovering since the earthquake. Growth has been modest, but macroeconomic stability has been maintained and inflation generally controlled. This was achieved, despite an unfavorable international economic environment, droughts and pests drastically reducing agricultural production, and repeated hurricanes and tropical storms, including Hurricanes Isaac and Sandy.

Economic growth is estimated at 2.7 percent in fiscal year 2014, down from the 4.3 percent observed in 2013. This substantial slowdown in 2014 was mainly due to delays in budget approval and adverse weather conditions that affected agricultural production. 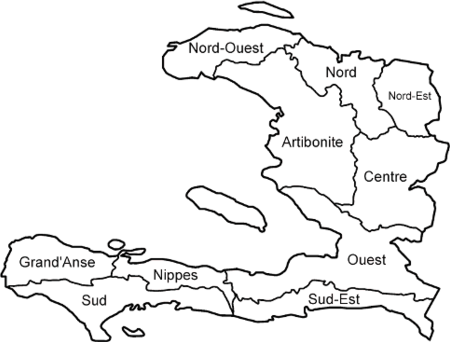 Haiti is a free market economy that enjoys the advantages of low labor costs and tariff-free access to the US for many of its exports. Poverty, corruption, vulnerability to natural disasters, and low levels of education for much of the population are among Haiti's most serious impediments to economic growth.

Haiti's economy suffered a severe setback in January 2010 when a 7.0 magnitude earthquake destroyed much of its capital city, Port-au-Prince, and neighboring areas. Currently the poorest country in the Western Hemisphere with 80% of the population living under the poverty line and 54% in abject poverty, the earthquake further inflicted $7.8 billion in damage and caused the country's GDP to contract. In 2011, the Haitian economy began recovering from the earthquake.

However, two hurricanes adversely affected agricultural output and the low public capital spending slowed the recovery in 2012. Two-fifths of all Haitians depend on the agricultural sector, mainly small-scale subsistence farming, and remain vulnerable to damage from frequent natural disasters, exacerbated by the country's widespread deforestation.

Haiti - The World Factbook at cia.gov/library

Thanks to these 156 Farehd members for their participation in the development of their regions (departments) of origin.